Each day the world consumes over 100 million barrels of fossil oil, yet creating oil takes nature millions of years…

Our unique hydrothermal upgrading platform, the Cat-HTR™ (Catalytic Hydrothermal Reactor), can rapidly and economically transform a wide range of biomass, waste plastic and industry residues into a synthetic oil or biocrude to produce more sustainable fuels and chemicals.

Find out about our patented Cat-HTR chemical recycling platform for waste plastic.

More videos, on the Cat-HTR for biomass residues and about iQ Renew, are available here.

Licella™ is the global leader in hydrothermal upgrading – the process of chemically transforming biomass and other organic based material (even non-recyclable plastic) into oil, which can be refined to advanced biofuels and chemicals. Hydrothermal upgrading is now widely accepted as one of the most likely production pathways for producing advanced drop-in biofuels at scale.

Why hydrothermal upgrading vs pyrolosis?

For plastic, hydrothermal upgrading with the Cat-HTR™ has the significant advantage of being able to chemically recycle mixed plastic and multilayer plastic, a true circular solution for End-of-Life Plastic. For biomass, the Cat-HTR™  produces a stable biocrude which can be easily shipped, is not acidic and is miscible (blendable) with conventional oil. 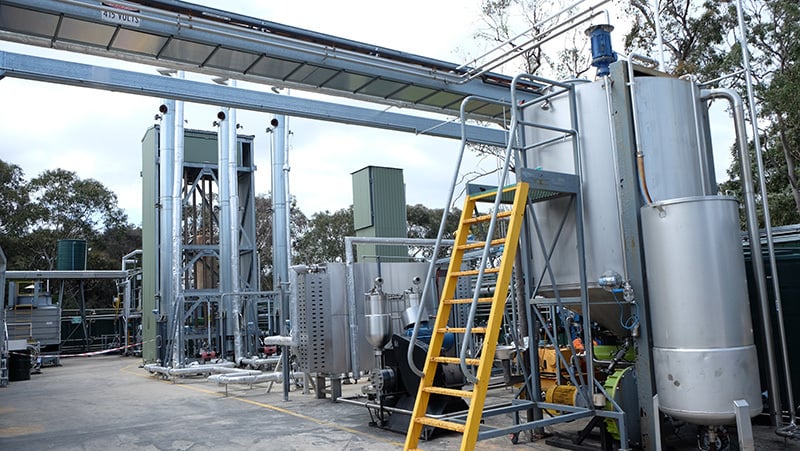 Where it all began…

The revolutionary Cat-HTR™ platform was invented in Australia by Dr Len Humphreys, Licella™ CEO, and Professor Thomas Maschmeyer. Having identified the limitations and issues associated with traditional biomass to biocrude transformation techniques, they set about on a journey which would lead them to turn conventional thinking on its head. The high water content of biomass had always been an issue for techniques such as pyrolysis, requiring the feedstock to be dried prior to processing – adding significant costs. Dr Humphreys and Professor Maschmeyer realised that water need not be the enemy and instead embraced water as the agent of change.

The invention of the Cat-HTR™ technology

“We began developing the Cat-HTR™ technology in 2005, from a related approach involving the use of supercritical methanol to convert edible oils to biodiesel.

While the technology approach was correct, the timing was not, as it came at the same time as the growing debate of feedstock versus foodstock. It was clear that we needed a feedstock which was non-edible, abundant and low cost.

For many decades people had tried to upgrade lignite by drying it. The breakthrough for us happened when we turned this approach on its head – embracing water as the agent of change, not the enemy.

This lead to a simpler and much more economical upgrading process.

From ancient to modern biomass, from demonstration to commercialisation

Lignite is effectively aged lignin (one of the key components of a tree alongside cellulose and hemicellulose). When a tree falls down, the celluloses are removed by microbial action and the lignin ages within the ground to form peat and then, over time, lignite. So lignite is just ancient biomass, given that a few tens of millions of years ago it was a tree.

The same Cat-HTR™ transformational principles that work for lignite can, with some modifications, also be applied to modern biomass, such as pulp and paper residues. This is how Licella™ was formed in 2007.

In 2007 the first design of the Cat-HTR™ (Generation 1) was completed and this very first plant was commissioned in early 2008. We are today incredibly excited to be moving towards our fourth generation and commercial scale Cat-HTR™ plants with our partners.”

Licella™ was established to commercialise the opportunities of Cat-HTR™ on biomass in 2007. Later in 2008 the first Cat-HTR™ pilot plant was commissioned in Somersby.

Partners with ESSO Ventures resulting in capital available for resource and technology development.